Get Rid of Your Lawn! 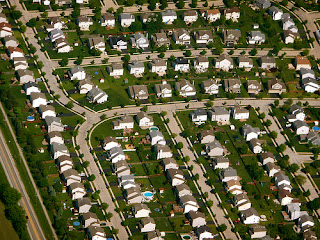 Typical American Landscape
http://www.worldchanging.com/suburbs_flickr%20Scorpians%20and%20Centaurs.jpg
Get Rid of Your Lawn!
My thoughts about the typical sprawl of turf around American homes.
Why do we spend so much time and money and space on our yards?
Depending on who you reference, Americans spend $17-$25 Billion Spent on Lawns Annually.  These numbers come from a number of pro-lawn websites as a way of showing how important lawns are to Americans.
Americans spend an average of 30 minutes per week working in their yard...  If you have ever been the one in charge of the yard, then you know you spend more than 30 minutes a week taking care of it.  As Twain said, "There are kinds types of lies: lies, damned lies, and statistics."  This is an American average - spread between over 300 million people.  Now, how many Americans actually have a yard?  There a millions living in urban cities with no yards.  This should increases the 30 minutes per week to at least 45 minutes (and I am being conservative).  Now, how many people are not the one acutally taking care of the yard (kids, spouses)?  There are roughly 110 million households in America.  Since, there are three times that many Americans, we can triple the time that one peson per household works in the yard... this makes the average closer to over two hours per week spent in the yard.  That is the same as 8 hours per month or 104 hours per year.  If the average work week is 40 hrs, then we are spending 2.5 work weeks per year working on our yard that produces nothing for us... wasting our time!
But why do we do it?
The brilliant, lush green lawn was not always the Holy Grail it is today.  Pilgrims and Pioneers to the West were not wasting their time on non-productive patches of grass.  So what changed?  There are a lot of history that could be told about this, but I'll summarize here.  At the turn of the last century when wealthy Americans started travelling to Europe more and more, they saw and admired the green lawns of the large estates and castles.  Like this: 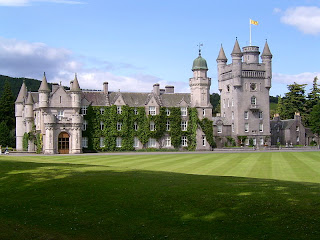 Now, where did we get our idea of lawns?
http://visitscotland.ch/wp-content/uploads/balmoral_castle_011.jpg
They came back and, along with some vey influential city planners and government officials, started making changes to their own large homes.  Initially, they used animals to create the close cut plots of grass.   Here is a great photo from the White House Archive showing what the "lawnmower" of the day was: 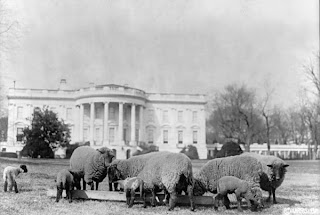 Even the White House could intelligently manage their lawn... in 1919!
http://www.whitehousemuseum.org/grounds/south-lawn/south-lawn-sheep-c1919.jpg
The issue soon became that many Americans wanted to "look" wealthy, but they didn't have the money to afford the servants to keep the lawn (as the wealthy Americans and Europeans did).  So Americans became their own servants to give the appearance of wealth.  Over time, this became the norm.  It is now expected to keep a lawn.  But few even question why we do it anymore.  This is our goal:

An American "Dream Home" and Yard
http://www.justmowngo.com/images/boom.jpg
In the U.S., there are about 23 Million Acres of Grass in yards throughout the country.  Conservative numbers say that one acre could feed between 3-5 people.  With intensive practices, many more people could be fed, but we will stay with this number.  69-115 million people could be fed if we converted all our yard grass to food producing land.

Here is a great article written by Michael Pollan (back in 1989!) on getting rid of your lawn.  He is one of my favorite authors.  If you have the time, you will probably enjoy it.
Here are some images of yards that have been converted away from turf.  Seeing the cost (time, water, fuel) it takes on upkeep, many homeowners are converting to turf-free yards.  Not so many are planting food or useful plants, but that is what I would love to see. 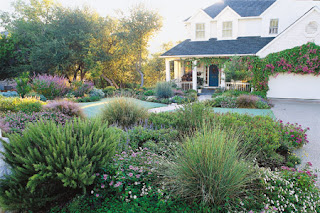 A lower maintenance front yard... no turf, but not as useful as it could be.
http://img2.timeinc.net/toh/i/g/1007_turfwar/turf-war-x.jpg 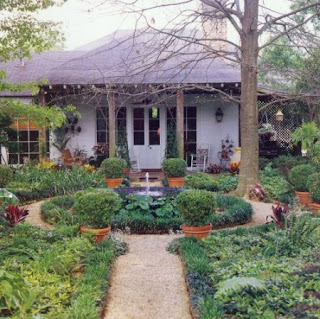 A good looking, yet still very useful (full of food plants), front yard.
http://cdn1.gardenhomeandparty.com/wp-content/uploads/2010/06/Front-yard-no-grass-450x448.jpg
In reality, I am not saying we should get rid of all our turf.  There is something aesthetic about a nice clean-cut yard, but I really do think we need to question why we are doing it and why we are spending so much time and money that gives us almost nothing in return.  Just my thoughts.
Posted by John K (Temperate Climate Permaculture) at 4:20 AM

Email ThisBlogThis!Share to TwitterShare to FacebookShare to Pinterest
Labels: Lawn