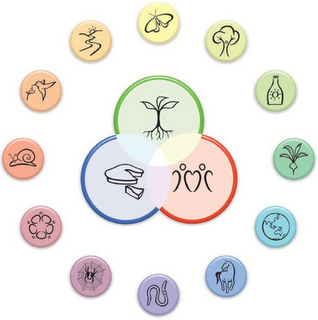 
2.  Catch and Store Energy
3.  Obtain a Yield
4.  Apply Self Regulation and Accept Feedback
5.  Use and Value Renewable Resources and Services
6.  Produce No Waste
7.  Design from Patterns to Details
8.  Integrate Rather than Segregate
9.  Use Small and Slow Solutions
10. Use and Value Diversity
11. Use the Edges and Value the Margin
12. Creatively Use and Respond to Change

Principle Five: Use and Value Renewable Resources and Services
Holmgren's Proverb for this Principle:  Let nature take its course.

This principle makes sense to me on two levels: ethical and financial.  Let's start with the ethical.  As I have said many times before, I am an evidence-based environmentalist.  I need to see proof... hard scientific proof... not flashy, pseudo-science by some talking head with a good powerpoint or with the backing of some college dropout celebrity who thinks he has a platform to talk because he is a good actor.  I want to see that action A results in outcome B.

For far too long, there has been, and still are, a number of non-renewable resources that have been depleted either completely or to the point that it will take hundreds to thousands of years to replenish.  The first two that come to mind are rain forests and freshwater aquifers.  Probably the most disturbing, and really just sad to me, are the hundreds of species that have been wiped out forever.  Unfortunately, things often come to a point of, "Well, I am not going to lose my job or my house or my farm all because of some spotted owl or speckled minnow!"  The crazy liberal eco-fanatics push one way, and the misguided Christian capitalists push the other way.   My point is that it should have never come to that in the first place.  If we truly took care of the earth as God asked man to do in Genesis 2, then the prior discussion would never arise (for more detail see this post on Permaculture Ethics).  How much genetic diversity has been lost already?  Maybe there was a cure to cancer in a plant that was burned or dozed in the quest for a nice veneer on a kitchen cabinet in New York.  Who knows?  However, from my point of view, from an ethical basis, we need to use and value renewable resources as much as possible.

From a financial basis, this also makes good financial sense.  When I am shopping for almost anything, I will usually save up and buy one of the best products available.  Why?  Because I know that it will last a much longer time than the cheaper alternative (usually).  So, for a bit of a larger investment initially, I have saved more money in the long run in buying replacements and in time lost without that broken product.  Now, let's apply this to renewable resources, and let's just use water for irrigation as an example.  It will be cheaper in the short term to just use the hose and city water.  However, if I invested in a good rainwater collection system (as I outlined in this post on Rain Harvesting from your Roof), then the money I save in the long run will likely surpass the smaller daily charges from the water utility company.  On top of that, I am one step closer to independence, especially in times of trouble where city water might be unavailable (a broken water main, a biological terrorist attack, etc.).  Finally, I have also avoided depleting the source from which the city draws its water.  So in the end, for a long-sighted financial reason, I end up on the right side of the ethical line.  If everyone did this, then costs would continue to drop and non-renewable resources would begin to replenish.

This principle also ties in the ideas of conservation and cycling of energy (nutrients and resources).  When we are aware that the decisions we make have lasting ethical and financial impacts, we usually end up taking care of what we have in a more responsible manner.  We also find ways to use less energy, or we develop a way to reuse nutrients and resources more efficiently.  For example, I've seen a person who uses rain water to fill up irrigation cisterns and buckets.  What overflows from that is directed to his hot tub (so water is constantly being changed and no caustic chemicals are being used).  When he is done with the hot tub water, it is used to soak logs for mushroom production.  After that, the water is drained and used for irrigation.  What an amazing way to conserve and cycle a water resource!

Finally, this principle of using and valuing renewable resources also ties into principle six (Produce No Waste).  When our minds are open and our eyes are looking for renewable resources, we will often find a use for what others (and ourselves) previously see as waste.

"Let nature take its course" reminds us that when we design a Permaculture System, we are modeling and using natural processes and natural animal behavior to assist us in our goals.  Capitalize on what nature has already perfected, whether that is in building soil fertility or building self-sustaining forests, and harvest sustainably from plant and animal and wind and sun, to create a continuous bounty for yourself and your family.


Make the best use of nature's abundance to reduce our consumptive behavior and dependence on non-renewable resources.
- David Holmgren
Posted by John K (Temperate Climate Permaculture) at 6:46 AM