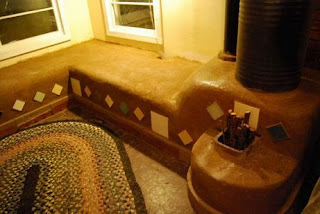 The concept is simple and brilliant.  Wood is burned in a uniquely shaped "combustion chamber" that burns wood very efficiently.  The heat produced from the burning wood heats up a large thermal mass (usually some form of bench).  By the time the exhaust exits the room, it is only about 90 degrees F (32 C).  The exhaust is mostly water and carbon dioxide.

Let me show you an illustration of a Rocket Mass Heater for better understanding:

WARNING: Sloppy hippy alert.  As is often the case, it is the more eccentric individuals who are the first to attempt/try new innovative projects like a Rocket Mass Heater.  These individuals are usually hippies.  These hippies are usually very messy or sloppy individuals who leave piles of junk all over the place.  Unfortunately, it is hard for many people to see past this chaos and find the gem underneath.  In my opinion, a Rocket Mass Heater has an amazing potential for energy savings.  I think they need to be made a lot more attractive before they will be adopted on a more widespread scale, but what an amazing concept!

Here is a pretty good video that highlights a number of Rocket Mass Heaters (with the aforementioned sloppy hippies).  It was done by Paul Wheaton of Permies.com.


This is just an introduction to the concept of Rocket Mass Heaters.  I plan on providing more detailed information in the future. Stay tuned!

Posted by John K (Temperate Climate Permaculture) at 3:29 AM