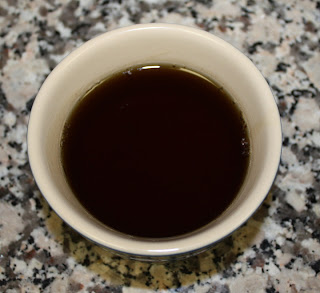 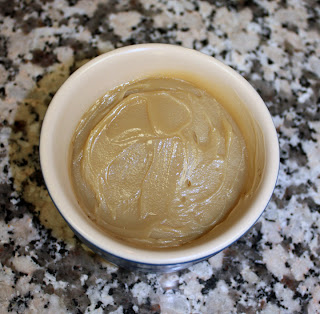 The main food item I wanted to procure from my duck, after the meat of course, was the fat.  Rendered duck fat has long been cherished as a flavorful fat with which to cook.  It is a great fat to saute vegetables or mix into pie crusts instead of butter.  In reality, duck fat is much closer (health-wise) to olive oil than butter or beef fat.  It stores for months in the refrigerator and can be frozen for even longer.  The top photo is the rendered duck fat at room temperature - it's liquid.  The photo below that is  the rendered duck fat just removed from the refrigerator - it's a soft solid.  Treat it just like butter or lard or cooking oil.

I collected my rendered duck fat from the drip pan under the duck as it smoked.  I poured all the drippings into a 2 cup glass measuring cup.  The liquid fat formed a very distinct layer that I siphoned off with a turkey baster.  I left a bit of good fat in the cup so I didn't bring along any of the non-fat liquids.  Typically, rendered duck fat is much lighter in color.  Mine is darker due to the smoking process.  The flavor reflects that as well.  There is a smokey flavor added to the richness of the natural fat.  I keep this small ramekin in the refrigerator covered in plastic wrap.  I just take a spoonful or two whenever I want to add some rich, smokey flavor to some sauteed veggies.  Indulgent! 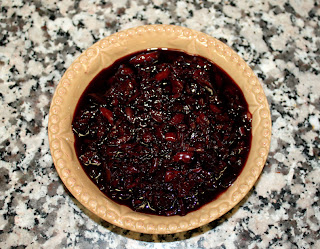 This dish got me into quite a bit of trouble with my wife.  I made some great, savory plum sauce that I served with the original smoked ducks.  I ended up with too much left over, and I thought to myself that if I reduced it for a bit, it would likely make a thick, sweet, savory barbecue-like sauce.  Well, I also had the left over giblets and necks that I did not use the day before when I smoked the ducks.  So I simmered the hearts, gizzards, and necks in a saucepan of water with some thyme, pepper, salt, and I think a rough chopped carrot, until the meat was very tender.  I then picked the meat off the necks and chopped the heart and gizzard into small pieces.  This was mixed into the reduced sauce and a great barbecue style dish was created.  I served it with warm rolls, and we made mini duck barbecue sandwiches.

After the meal, when I told my wife how glad I was to be able to use so many parts of the birds and explained to her how... well, she was not too happy.  She told me that she would prefer not to eat neck.  I told her that I think she has been too removed from whence her food comes.  She gave me the look.  I think I will tell my wife before she eats neck in the future. 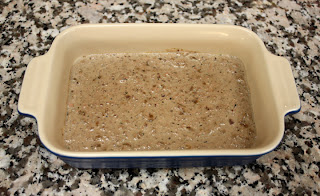 I had two duck livers sitting there that were begging to be made into a pate.  I had never made pate, but I thought I would give it a try.  I sauteed the livers in a bit of the rendered duck fat over medium heat with a shot of Bowmore Single Malt Scotch.  I then placed the livers and cooking liquids into a food processor with some garlic, salt, pepper, a splash of heavy cream, and a little bit of thyme.  This was pureed until smooth, poured into a flat dish, and allowed to cool.  It was served with toasted croissants.  Very rich and savory.  Quite good for my first attempt if I say so myself! 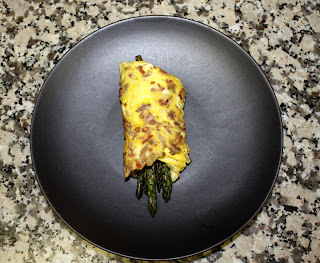 I love to find creative ways to use up all my leftovers.  This is a great example.  We ended up with a small pile of duck meat that was cleaned off the bones after the carving was done.  With a turkey or chicken, I love to use this to make turkey or chicken salad sandwiches.  Smoked duck salad sandwiches just didn't sound that good to me.  That was when I thought of this omelet idea.  I lightly sauteed the chopped duck meat in a frying pan with a bit of olive oil and the rendered duck fat.  I then added one whisked egg, flipping once, until cooked through.  We also had a few grilled asparagus spears remaining from the night before, and these I wrapped in the omelet.  Easily a meal unto itself. 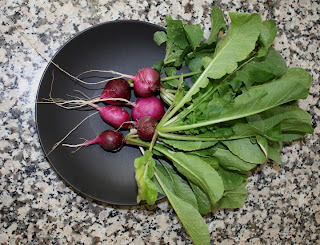 Radishes from my garden

Finally, with no more duck meat left, all I had remaining was my rendered duck fat.  Fresh from my garden I chopped these radishes and sauteed them a spoonful of the fat.  The smokey richness of the duck fat with the spicy, crisp radishes was a great flavor combination.

So, there you have it.  This is how I like to use my leftovers.  Entirely.  And with the sense that the leftover is not a leftover, but a primary goal in cooking the dish in the first place.

Posted by John K (Temperate Climate Permaculture) at 2:28 AM