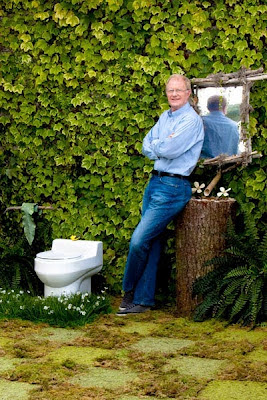 A few weeks ago, my beloved wife decided that she would take a straw poll over the course of a few days to find out which of our friends would be willing to have a composting toilet in their homes. I believe she did this for a few reasons. First, I think she really was interested to see what our friends thought of the idea. Second, I think she thought it was fun to point out what she perceives as one of my eccentricities (i.e., my vehemence against wasting water). Third, with her mind already made up about the topic - "this is not going to happen in my house" - I think she wanted moral support to make a stand against this idea.

The vast majority of our friends, not surprisingly, thought I was a bit off my rocker and quickly, and vehemently in some cases, sided with my wife. The only issue, well there were quite a few, but the one I am going to address here today, is that almost all negative opinions were coming from the people who thought that to use a composting toilet one needs to poop in a bucket while trying not to faint from the gawd-awful stench with flies buzzing around your head. I think most had the idea of a nasty porta-potty jammed into the corner of their bedroom in mind while answering my wife's poll question.

So today I want to dispell at one myth. Yes, there are some systems of composting toilets that use 5-gallon buckets. No, they do not smell at all - well, they smell like sawdust. If there is a smell, you are doing something wrong. If there are flies, you are doing something wrong. However, there are many other systems that are slightly more to vastly more automatic and "hands off" than the 5-gallon bucket method.

Let me show you a few of these systems...

A schematic of one type of modern composting toilet system.
This design has a large composting chamber in the basement.
http://tlc.howstuffworks.com/home/composting-toilet1.htm 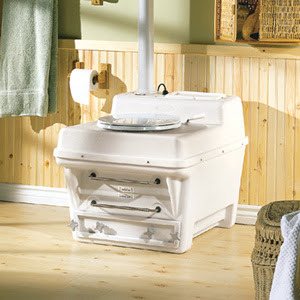 
This is a great video highlighting Envirolet Toilet Systems.
http://www.youtube.com/watch?v=06ZU4KCmYFQ

Posted by John K (Temperate Climate Permaculture) at 3:31 AM