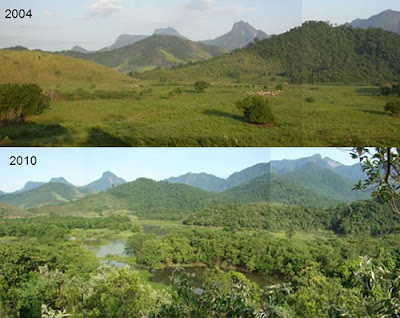 Large scale reforestation in Brazil. We can do the same... just a little smaller.
http://www.sutmundo.com/wp-content/uploads/2010/09/re-forestation.jpg
I have been writing a lot lately about succession and its phases/stages and how we can use this knowledge to create more diverse and resilient ecosystems and Forest Gardens. If you remember, Primary Succession is the creation of an ecosystem from bare soil with no life in it. Secondary Succession is the regeneration of an ecosystem after a disturbance.

Now in reality, there is no place on earth that is devoid of life but for a very few places which we would not be living anyway. Every location likely had forest or meadow or prairie on it at some point in the past. Often what we find though is a place which one to two hundred years ago was a forest, but now is an abandoned corn or hayfield. The disturbance has been so large and repeated so often that we are almost starting from scratch in these locations. Trying to recreate a vibrant ecosystem, and in our case a food forest woodland, in this scenario is what I call pseudo-primary succession. The most extreme example of this that I have seen is what Geoff Lawton has done in Jordan and is well documented in his Greening the Desert video.

Many people have attempted to create a full forest garden in an abandoned farm field by planting all the fruit trees they wanted at one time. What they often end up with is a large die-off of these plants or lack of vigor in growth. It may take two or three times as long for these plantings to turn into a viable ecosystem than if they would have understood the power of succession. Many of the plants may be stunted or producing a fraction of what they have the potential to produce.

One of the big reasons that the plants do not do well in the above scenario is that they are competing with pioneer species. Pioneer species are plants, often considered weeds, which are just waiting to grow in newly turned soil. An abandoned field is full of these dormant seeds. In nature, pioneer plants are a vital part of succession. They cover the soil quickly and reduce erosion. They often have deep taproots that pull nutrients from the depths. They do well in droughty, full sun, bare soil conditions. As described previously in the stages of succession, the first plants are annuals and herbaceous perennials. Eventually shrubs and then trees appear. Pioneer species can be all of these types of plants, but the larger shrubs and trees often take many years to appear.

Let’s face it. Many of the plants we would want in a forest garden (apples, pears, peaches, etc.; a.k.a. “goal species”) are not known for their ability to withstand harsh environments of poor soil, high evaporation, and low moisture. So when we plant these somewhat weak species in a field that has limited natural fertility and is full of plants made for this environment, our weak plants are just not going to do very well. If they do well, it is because they happened to get placed in a very forgiving microclimate or because we have done a lot of work to provide for their exacting needs.

But I don’t want to do a lot of work if I can let nature do it for me.

This is where managing the pseudo-primary succession comes in to play. We can choose the pioneer species that grow on our land. Granted, there will always be other pioneer species that we did not plant or did not desire, but we will tip the balance in our favor by seeding and direct planting of our desired species.

Once we have our bare land ready, and this may take some earthworks (pond creation, swale creation, etc.) which I have and will discuss in other articles, then we can plant our chosen pioneer species. As I said, pioneer species can range in form from annuals to trees. We can blanket the ground in seeds of annuals and herbaceous perennials to start, but we can fast forward the natural progression which can take over a decade, by directly planting pioneer shrubs and trees species as well.

Some people will give anywhere from one to three seasons for the pioneering woodland to mature. Others will just plant the goal species at the same time. I don’t think there has been enough research yet to know which method is better. I think giving things at least one season makes sense. This allows the barren site to begin resembling a small woodland (Oldfield Mosaic stage). Then the goal species are planted near the nitrogen fixing trees. Our goal species then have what is known as a nurse tree growing near it providing wind protection, excessive sun protection, evaporation protection, and excess nutrients primarily of nitrogen but also other nutrients from the other pioneer species near it.

Some of the reseeding annuals, herbaceous perennials, and shrubs will continue growing in patches of sunlight, but all the other plants will eventually find themselves in shade. If we chose plants intolerant of shade, which was one of our goals, then they will die out. This leaves us room to plant other goal species of reseeding annuals, herbaceous perennials, and shrubs that thrive in the understory yet still provide us with direct or indirect uses. Direct use would be the harvest of fruit, vegetable, wood, fuel, cordage, medicinals, animal feeds, etc. Indirect use would be beneficial insect attractors, dynamic accumulators, mulch plants, windbreak plants, barrier plants, etc.

Using succession, or what I call managed pseudo-primary succession, will give us a more vibrant, diverse, and fertile ecosystem which is typically established much sooner than a forest garden planted without regard to succession.

I’ll be providing a list of Pioneer Species soon, so stay tuned.
Posted by John K (Temperate Climate Permaculture) at 6:54 AM