Mob Grazing on the Farm and on the Homestead: Greg Judy and Jack Spirko

I recently shared a TED Talk by Allan Savory (you can see that article here) on how to reverse desertification by using intensive rotational grazing, a.k.a. "mob grazing" with cattle. As is with most TED Talks, the discussion was big on ideas but not on details. That is the point with TED Talks though. They want to spread ideas just to get them out there.

However, the following lecture by Greg Judy, which was given at the Virginia Biological Farming Conference in 2011, really explains the why and how of this amazing idea. If you have any interest in keeping livestock, in healing the land, or in the care of animals in a humane way, I would recommend watching this keynote address: 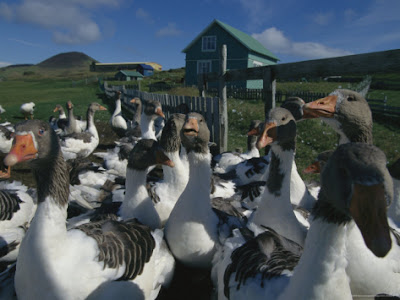 Geese are a smaller-scale alternative to Mob Grazing.
http://imgc.artprintimages.com/images/art-print/domestic-geese-graze-on-the-lawn-by-a-local-farmers-house_i-G-28-2878-RK1PD00Z.jpg

Now, what if you love the idea of Mob Grazing, but you either don't want to keep cattle or don't live on a 100+ acre farm? What if you have a little "land"... like a large suburban yard? Well, if you live in an area where you can keep geese or chickens or even a few goats, then I would really recommend listening to the following podcast by Jack Spirko from The Survival Podcast. Jack spends a lot of time discussing homesteading and Permaculture, and this podcast focuses on using animals other than cattle for homestead-level Mob Grazing: Taking "Mob Grazing" to the Small Piece of Land.

Posted by John K (Temperate Climate Permaculture) at 5:50 AM