Portugal, please say "No!" to the McBifana. 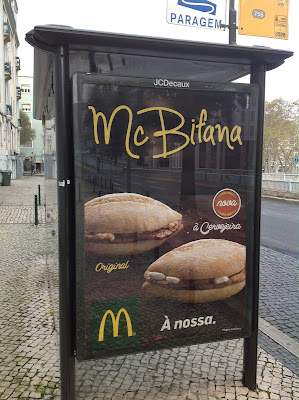 I recently spent a few days in Lisbon, Portugal. I was walking one morning, and I came across this advertisement at a bus stop. I was very disappointed.

A bifana is a traditional Portuguese snack or light meal. It consists of a thinly sliced beef or pork steak placed between a sliced roll. By contrast, a McBifana is the exact opposite of a traditional food. It is a large, international, billion-dollar, food corporation that is coming in and trying to replace a food that is best made locally... by locals with local ingredients.

In reality, I support the free market, so I am not suggesting Portugal ban McDonalds. However, what I would love to see is the Portuguese avoid this food so McDonalds has to take it off their menu. Some things should not be in the realm of fast-food. Okay, pretty much nothing should be in the realm of fast-food if you actually care about quality food and health, but bastardizing a bifana is going a bit too far.

For a bit more information on a similar concept, I wrote a brief article on the Slow Food Movement that you can read here.

Posted by John K (Temperate Climate Permaculture) at 7:08 AM