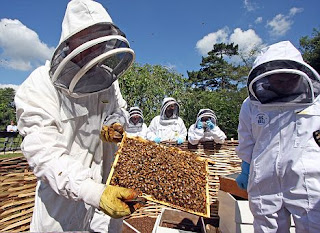 
Today is just a quick link to a video. This is an interesting documentary about honeybees and their decline over the last decade. There is a stong case to be made at placing the blame at the feet of government and agriculture corporations.
http://www.youtube.com/watch?v=i97o0slqv-s


From their press release:
Whether you are a beekeeper, a conservationist, an ecologist, a food-producer or a parent - please take half an hour to watch this new American video documentary about the global death of honeybees, bumblebees and other pollinators.

This is NOT just about the death of entire bee populations around the world, it is about the potential loss of 30% of our food supply and an all-out assault on the ecosystems of the world: insects, birds, amphibians, bats, fish - everything is threatened by the global distribution of hyper-toxic, neuro-toxic pesticides being applied to over 200 million acres of corn and crops in North America alone.

Posted by John K (Temperate Climate Permaculture) at 6:31 AM