Update - What I am Brewing: Azorean Blackberry Fig Honey Wine 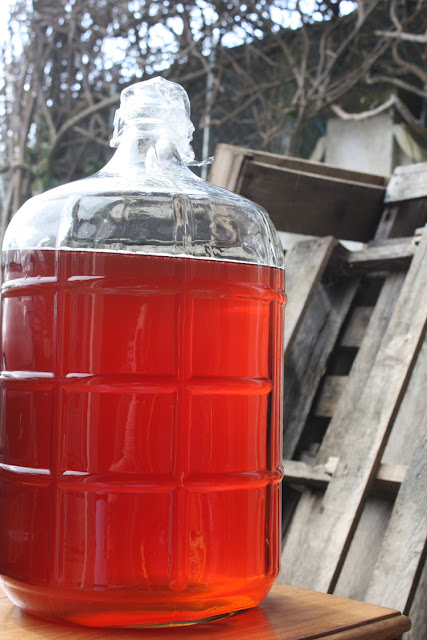 My Blackberry Fig Mead... after almost 7 months of aging, it is still not ready!

Update: 22 March 2013
I finally had some time to rack (transfer) the mead into another carboy (glass jug). As you can see in the photo above, the red color has remained, though it has softened a bit. I stole a small glass to sample it. The mead was a very beautiful light pink in color, not the deeper red of the whole five gallon (19 L) batch. There was a very harsh, acidic first taste to it, but after that passes there was a very good flavor that lingered around for quite a while. I couldn't quite identify what the flavor was, probably because I had such a small sample, but I really like it. I am hoping that with some additional aging, the harsh flavor will mellow.

Today, I racked the mead to a new carboy leaving the lees (sediment) on the bottom of the original carboy. The new volume was lower than desired, so I added some additional honey water. I mixed 6 ounces honey with 18 ounces filtered water. This got it closer to the top of the carboy. I could have added more, but to be honest, I wasn't exactly sure how much additional volume I needed, and I didn't have a whole lot of time to mix and add even more.

Finally, I added a pack of yeast (Saccharomyces cervisiae (ex-bayanus) for sparkling wines from Lalvin). My original plan was to make this mead entirely a wild fermentation experiment. However, after waiting seven months, I think I lost my nerve! The flavor is developing well, and I really just didn't want to mess things up, especially after such a long wait. My future plan will be to run some side by side experiments (which I will document here) comparing completely wild fermentation, partially wild fermentation (like this one), and as non-wild as I can make it. Then I will be able to do some side-by-side taste tests and see which one turns out best. However, with just one batch, I really wanted success more than scientific results. The raw material was more difficult to come by since I was not raising the blackberries or honey myself. Once I get these things producing on my land, then I will be doing quite a lot of experimentation.

This batch of mead likely needs another 3-6 months before it is truly drinkable. I will let this fermentation cycle run its course, and then I will bottle it. Once in the bottles, I will be able to sample some every few months and taste how it matures. I expect it will only get better with time.


Okay, to be technically correct, a mead is a honey wine. When fruit is added to mead, it is then called a melomel. So this concoction should be called a Blackberry Fig Melomel, but few people know what a mead is, let alone a melomel. With all that said, here is what I did... 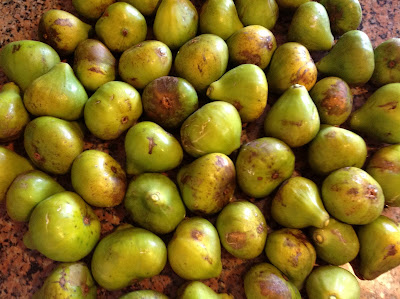 Figs from my garden. 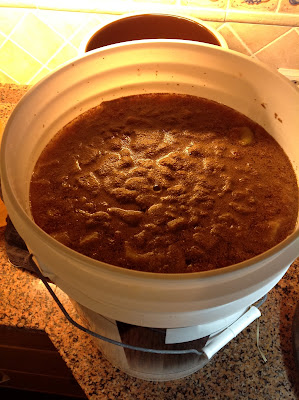 Day 2 of the fig and honey fermentation... smelled like Fig Newtons! 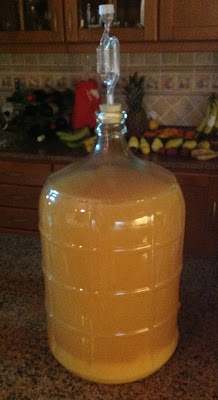 The melomel after the first racking. 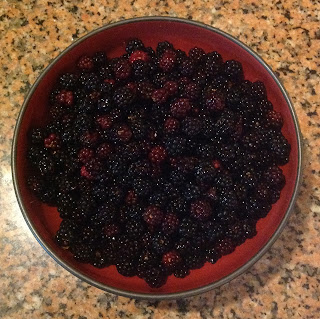 The pint of blackberries from my garden wall.
I only fell off the wall once during harvesting! 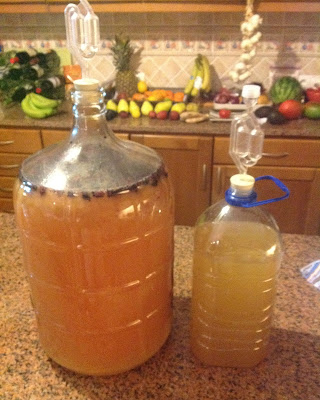 Just after I added the blackberries.
Next to this is a small reserve of honey water that wouldn't fit.
I am letting this ferment without any fruit as well. 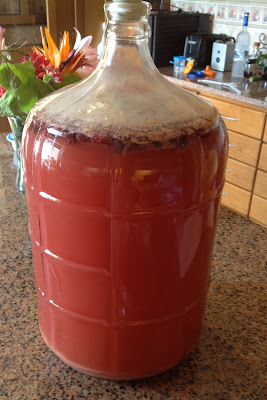 After about 5 days of fermenting with the blackberries, the liquid took on a beautiful pink hue. 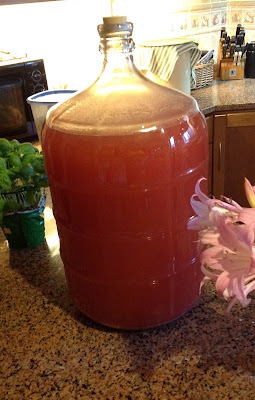 Racked off the blackberries, topped off, and ready for aging. 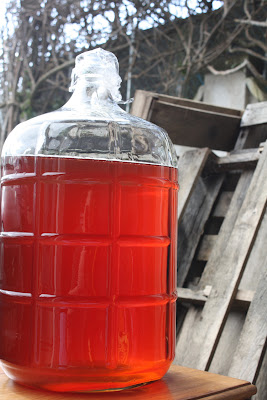 Just racked into a clean carboy after 7 months of aging.