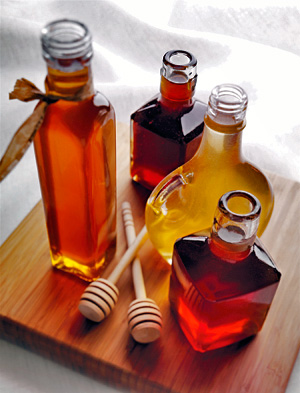 Yeah... I love Honey!
http://www.honeylocator.com/images/interface/various-honey-bottles.jpg
In a previous post, I discussed an Introduction to Beekeeping.  While there are many other benefits to keeping bees (pollination and wax being the main things), it is the honey that remains the prime motivation for beekeeping.  It just tastes so good! 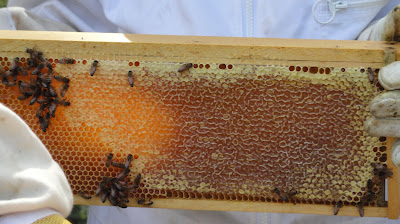 Honey packed in the honeycomb.
http://3.bp.blogspot.com/_m8nI4_uDXW0/TI2lDER_axI/AAAAAAAAFG8/JADaDQCWzHw/s1600/9-12-10+Honey+in+hive+and+capped+in+hive.jpg
So what exactly is Honey?
Honey is the primary food source for honey bees during the winter when no fresh nectar is available.

In the spring, summer, and part of the fall, a honey bee will travel from flower to flower and collect pollen and nectar from the flowers.  It will eat what it needs, but it will also store as much as it can in its "honey stomach" before flying back to the hive.  A bee actually has two stomachs.  One is called the honey stomach, and it acts like a backpack.  The second stomach is its true stomach used for eating.

Once returning with a full honey stomach, the bee will transfer small drops of the nectar to other bees called "house bees".  These house bees will hold the nectar on their tongues and "chew" the nectar, mixing specific enzymes into the nectar.  The enzymes are converting the nectars from complex sugars to simple sugars (mostly Fructose and Glucose).

The house bees will then put the nectar into the honeycombs where most of the water evaporates.  House bees will fan their wings to speed up the evaporation process.  With less water, the sugars are concentrated.  This concentrated sugar prevents fermentation and bacterial growth.  The bees then cover the honeycomb with wax sealing in the honey, and the bees have stored food for the winter. 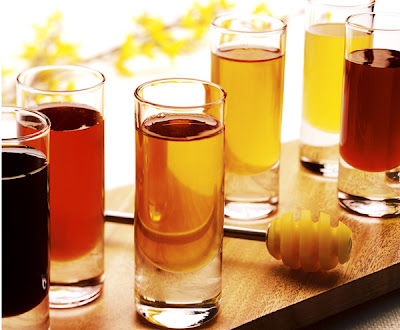 So many types of Honey!
http://www.honey.com/images/gallery/HoneyGlasses.jpg
What are the different types of Honey?
This really depends on the types of flowers (or insect!) that the honeybees visited.  The source of nectar determines the wide variety of colors, aromas, and flavors of the resulting honey.  There are literally thousands of types of honey.  Basically, honey can be broken down into the following major categories: 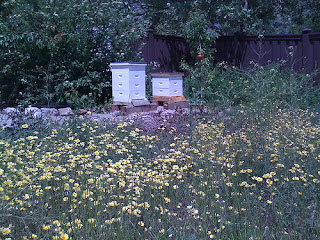 True Wildflower Honey.
http://farm4.static.flickr.com/3554/3563892097_9140141e2f.jpg
Wildflower Honey: Also known as Polyfloral Honey.  It is derived from many types of flowers.  Usually, the primary sources are known.  This gives the honey a wide variety of tastes, colors, and aromas. 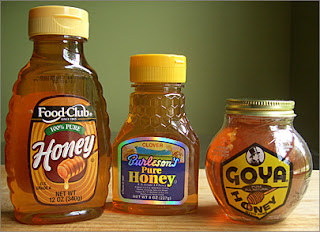 Commercial Honey is usually Blended Honey
http://cdn.simpledailyrecipes.com/wp-content/uploads/honey-comparison.jpg
Blended Honey: This is a mixture of multiple types of honey.  Most commercial honey is available as blends to create standard flavor, color, and aroma.  Consistency is the key to repeat customers... well, so they think.  I am not a fan of this practice, but usually the honey still tastes pretty good. 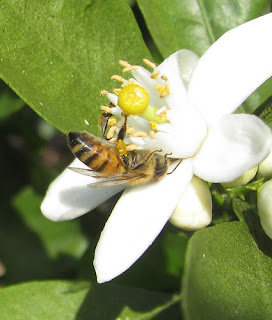 Honey Bee collecting nectar for Orange Blossom Honey
http://farm4.static.flickr.com/3101/2332089434_0c97cc5297.jpg
Monofloral Honey: This honey is derived primarily from one type of flower.  Obviously, a beekeeper cannot know that each bee brought back nectar from only one flower type, but they do a pretty good job of only providing one nectar source: orange groves in blossom, fields of clover in blossom, etc.  Here are just a few of the more common types from around the world: 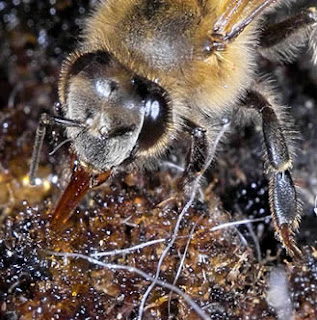 Honey Bee collecting honeydew from the Sooty Beech Scale (a honeydew producing insect).
http://www.airborne.co.nz/images/technical/BeeCloseUpHoneydew.jpg
Honeydew Honey: This honey is derived when honeybees collect the sweet secretions from aphids or other sap-sucking insects.  Yeah, pretty crazy.  The honey is very dark and is not nearly as sweet as floral honey.  Germany, Greece, Bulgaria, New Zealand, and Northern California are all known for producing honeydew honey.

What are the forms of Honey? 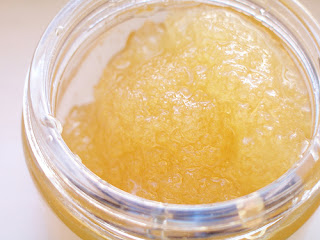 Crystallized Honey: Also known as granulated honey.  If honey is old enough or cold enough, some of the glucose crystalizes.  You can eat it, and the honey has a bit of a crunch to it.  I like it like this sometimes.  All you need to do is gently heat it, and the crystals convert back to liquid. 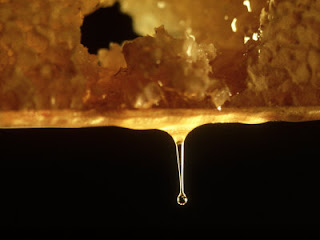 Raw Honey... straight from the comb.
http://cache2.allpostersimages.com/p/LRG/26/2680/CRZUD00Z/posters/scientific-oxford-honey-bee-honey-dripping-from-comb.jpg
Raw Honey: Straight from the hive.  It can be filtered or strained, but not heated.  Raw, unfiltered honey will contain some pollen and small bits of wax.  Local, raw honey is said to be helpful in alleviating seasonal allergies.  While there some mixed results in scientific studies attempting to validate or refute this, I would say that it is unlikely to harm.  And it may do some good. 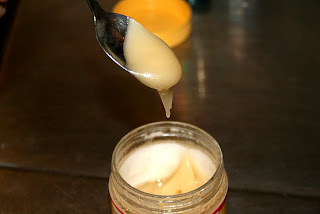 Creamy, Whipped Honey... it's delicious!
http://basicbeekeeping.files.wordpress.com/2008/11/whippedhoney.jpg
Whipped Honey: Also known as creamed honey, spun honey,  and set honey (among many other names).  Crystallized honey contains large crystals, and these large crystals are ground into really tiny crystals.  These ground crystals are mixed into regular liquid honey, and the small crystals create a domino effect, reproducing really small crystals throughout the honey.  You are left with a honey that feels whipped and creamy, and it is thick and easy to spread. 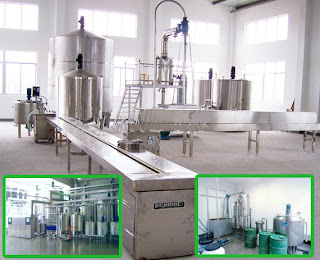 Pasteurized Honey: Honey that has been heated to 161F (71.7C)  It kills yeast cells.  Destroys microcrystals so that the honey takes longer to crystallize in storage.  It also destroys enzymes (diatase is the one we know for sure) as well as who knows what else.  I think if you are going to use it yourself and not store it for long, there is not as much need for pasteurization. 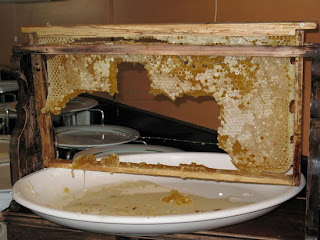 Honeycomb Buffet in Turkey.
http://images.travelpod.co.uk/users/3beansabroad/turkey_2007.1183564800.img_0110.jpg
Comb Honey: Honey that is still in the comb.  Often sold in a container with the caps removed.  I have been to a number of buffets in Turkey that have a whole frame on the table.  You take a knife and cut a piece for your plate.  I love the novelty of it, but there is a lot of wax in the honeycomb.  If you chew too much, you will get all the honey out and be left with a mouthful of wax.  It is tough to discreetly spit out a chewed hunk of wax.  And yes, I have eaten some big chunks of wax to avoid this.

I hope this gives you a better understanding and appreciation of the liquid gold your busy insects are making.

NOTE: DON'T GIVE HONEY TO ANY CHILD UNDER THE AGE OF ONE!
The bacteria Clostridium botulinum can produce a toxin (boulinum toxin) when the spores of this bacteria grow without oxygen.  Children under the age of one do not have a stomach mature enough to kill the spores, and the bacteria reproduce rapidly... and rapidly produce the toxin that can kill.
Posted by John K (Temperate Climate Permaculture) at 4:09 AM