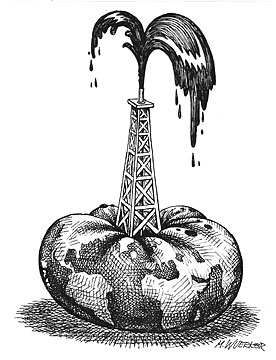 Peak Oil is not the same as Oil Depletion.  Oil Depletion is when the earth feels the scarcity of oil, and is associated with rapidly rising prices and limited supply (i.e. you can't buy it anymore).

The concept of Peak Oil came from the American geophysicist, M. King Hubbert.  In 1956, he proposed ("predicted") that the U.S. would reach peak oil production between 1965 and 1970.  In the early 1970's the U.S. maxed out its extraction/production of oil.  Since that time, there has been a gradual, but steady, decline.  He was right.

Hubbert's theory, now known as Hubbert Peak Theory, can be applied to any region, country, or the planet as a whole.  It states that oil production will always follow a bell-shaped curve. 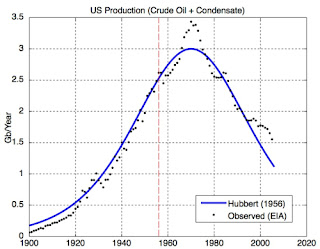 Graph showing Hubbert's prediction (blue) with actual data (dots).
http://geology.rockbandit.net/wp-content/uploads/2008/09/peak-oil.jpg
So, where are we at today on a global level?  Here is a graph that shows the majority of the world's oil producing counties and their oil production curves.  Most countries in the world have already reached Peak Oil.  There are only a handful of countries (in the Middle East) that have not yet reached Peak Oil. 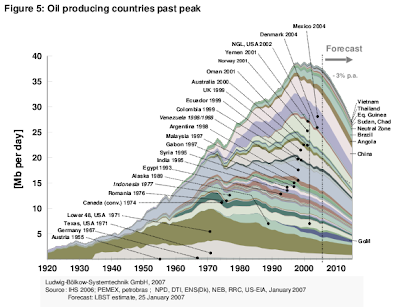 Graph showing countries in the world that have already reached Peak Oil.
http://gasprices-usa.com/Oil-producing-countries-past-peak-Oct-2007.png
No one knows for sure when Global Peak Oil will take place.  Some people think it has already occurred.  Others, though not many, think that it will not happen for at least another hundred years.  As you can see from the chart below, there are a lot of different theories/models out there that are attempting to answer the question of when Global Peak Oil will occur. 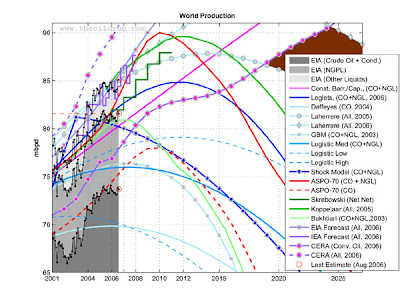 Graph showing different models of prediction for global Peak Oil.
http://gasprices-usa.com/theoildrumforecasts.jpg
In science, when you see so many models without consensus, you can be sure that the scientist truly do not know.  What you can take out of this is the common trend showing Peak Oil is coming sooner than we would like.  The International Energy Agency, which is a pretty legitimate intergovernmental organization, believes we reached Global Peak Oil in 2006.  There are other organizations who believe that Global Peak Oil will not occur until after 2020.  These organizations also believe that through the period of Oil Depletion, alternative energy scientists will make major breakthroughs that will allow the major oil-dependant countries to smoothly transition to an oil-free world.

I don't know if I am quite so confident.  I don't believe we will have a world-wide societal meltdown, but I don't think the transition to an oil-free world is going to be very smooth.

This is yet another reason I am a huge proponent of Permaculture.  With proper design, so many of our dependancies on oil start to diminish.  If we have the ability to produce the majority of our own food and energy needs, then Peak Oil is an inconvenience, and not the end of the world as we know it.
Posted by John K (Temperate Climate Permaculture) at 5:39 AM