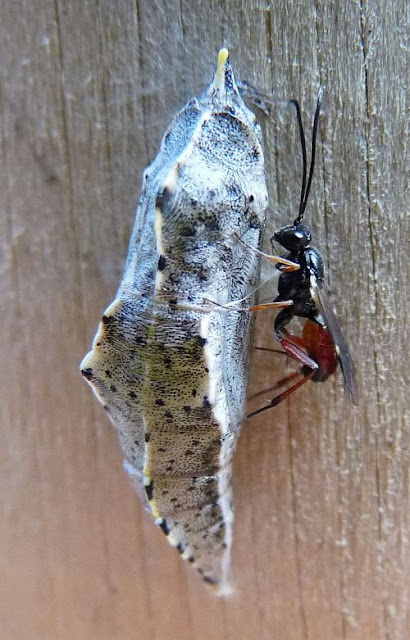 This Ichneumon Wasp is about to lay an egg inside this butterfly pupae.
http://rangerjames.files.wordpress.com/2010/10/pupa-attacked-by-ichneumon-fly-low-res-version.jpg?w=500&h=781 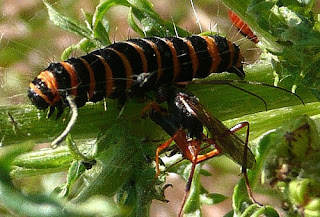 Another caterpillar about to be injected with an egg.
http://farm4.static.flickr.com/3227/2646328285_65d74ed403.jpg
Why are they beneficial?
Just picture the Aliens movie genre when I describe these wasps.  Ichneumon Wasps typically don't have the ability to sting in self defense.  The females of the species have long ovipositors (egg laying tubes) in place of a stinger.  Most species inject their eggs into a host's body, and some will include a bit of venom with the injection.  The egg hatches and the larva will eat the host from the inside out as it grows, typically saving the vital organs for last to keep the host alive as long as possible.  The host is usually a larva or pupa (e.g. caterpillars, grubs, beetle larvae, scale, plant bugs, leafhoppers, etc)... species which can often cause great damage in our gardens. 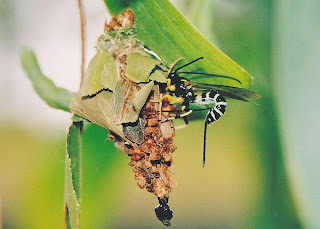 Ichneumon Wasp about to inject a case or bag moth caterpillar in Australia.
This caterpillar constructs a home on its back with material from its environment.  Not safe enough!
http://www.brisbaneinsects.com/brisbane_parawasps/images/IMG_0004b.jpg
What is their lifecycle?
Male Ichneumon Wasps will search for a female with which to mate.  He has no stinger.  After mating, the female will search for a place to lay her fertilized eggs.  Some will lay their eggs in the ground, but most look for a host larvae or pupa.  The female will land on the host and pierce the host with its sharp ovipositor.  At least one egg will be deposited into the host, and then the female will fly away.  It seems that most Ichneumon Wasp species target only one or a few host species.  Each one is different.  Some Ichneumon Wasps only target wood-boring larvae (of wasps or beetles).  These females actually have metal (manganese or zinc) in their ovipositor!

The adult Ichneumon Wasp will emerge from the cocoon and will typically begin to look for a mate right away.  Some species have only one generation per year, while others may have two or more generations per year. 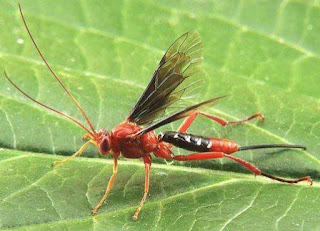 Another species of Ichneumon Wasp
http://www.organicgardeninfo.com/images/ichneumon-wasp.jpg
What do they look like?
They look like wasps!  Really, they look like skinny wasps with unusual color patterns and markings.  They are usually black or dark colored with lighter colored legs.  Size can range from an eighth of an inch (about 3 mm) to over five inches (12 cm) including the ovipositor.  Females will have long thread-like ovipositors that look like long stingers, but they don't sting - so don't be afraid.  Males lack the ovipositor.  They have unusually long antennae; some species use these antennae to tap along wood to detect hollow spots that house burrowing larvae. 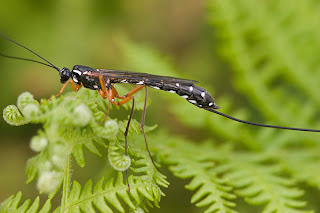 What do they need?
Adults typically feed on nectar of flowers, shrubs, and trees.  The smaller the flower, the easier it is for these wasps to feed.  It has been said that ichneumon wasps prefer members of the carrot family. 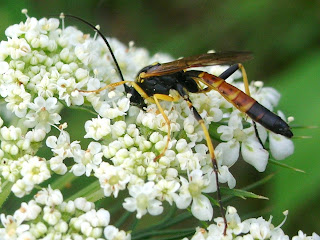 Adult Ichneumon Wasp drinking the nectar of a carrot flower.
http://1.bp.blogspot.com/_D2MiWbLwOF8/So2e7vJ79xI/AAAAAAAABPw/Ej0XBHfjyYQ/s1600-h/DSCN6765.JPG
Purchase:
These wasps are not available to buy.  If we create a good habitat for them, they will arrive on their own. 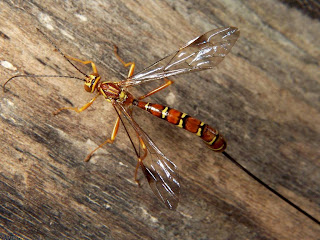 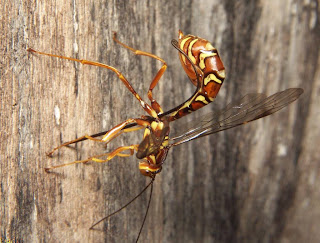 She found her host and begins drilling with her metal-tipped ovipositor.
http://www.cirrusimage.com/Hymenoptera/Meg_ryan_01.jpg
Check out these other pages on beneficial insects in your garden!
Bees
Lacewings
Ladybugs
Praying Mantis
Trichogramma Wasps
Posted by John K (Temperate Climate Permaculture) at 4:13 AM