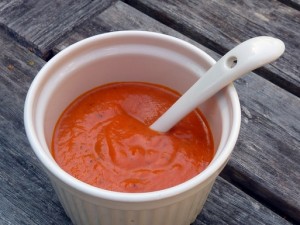 Roasted Red Pepper Sauce
As much as I would love to take credit for this entire recipe, I cannot.  This recipe is based (okay, it is almost identical) on one Bobby Flay developed for his Mesa Grill restaurant.  I have made this a number of times, and I have yet to meet someone who doesn't love it.  I've actually caught a few people eating it by itself with a spoon... yeah, it's that good!  It can be used with almost all grilled meats, but it is particularly good with a build-your-own-fajita (veggie, chicken, beef, or pork) style meal.

Note:
Red Peppers:  Bell peppers work great, but any large, sweet pepper will work well.  Where I am living overseas, I often do not have the classic Red Bell Peppers to work with, so I use the local longer and thinner skinned red peppers.  They still taste great, but are a bit harder to work with.

Red Pepper Preparation:  Wash the peppers and place on a very hot grill or over a gas burner on high.  The skin will blister and blacken (char).  Watch closely and keep turning with a pair of long handled tongs until the entire pepper is black, not just blistered.  This takes longer on a gas stovetop.  If doing this indoors, just make sure your stove vent fan is on! Remove from the heat and let the peppers cool.  Peel the charred skin off.  I find that doing this under slowly running water and over a colander is easiest and cleanest.  Then seed and chop the pepper. 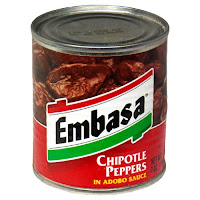 Chipotle Chile Puree:  Chipotle Peppers are just smoked and dried jalapeno peppers.  They are available dried, but more commonly sold in a can with adobo sauce (a classic tomato based marinade).  To make the Chipotle Chile Puree, take one can of Chipotle Peppers and place in a blender.  Puree until smooth.  Put in a small container in the refrigerator where it can store well for at least a month.

Combine red peppers, onion, garlic, vinegar, mustard, and chipotle pepper puree in a blender or food processor.  Blend until smooth.  Season with salt and pepper (a pinch or three of each).  While the motor is running, add the oil slowly until incorporated (emulsified) into the sauce.  You can strain the sauce through a thin mesh vegetable strainer for a smoother sauce, or don't strain for a thicker sauce.

Posted by John K (Temperate Climate Permaculture) at 4:16 AM

Email ThisBlogThis!Share to TwitterShare to FacebookShare to Pinterest
Labels: Recipes