Saved by my Power Box! 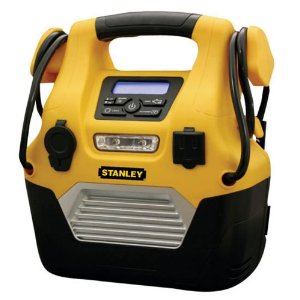 Stanley DPS109 Digital Portable Power Station
Yesterday morning I climbed into my car to go to work.  I turned the key... nothing.  No lights or radio.  Nothing.  I was already running a few minutes late.  I looked up and noticed a very faint glow from the dome light overhead.  Then I noticed the door ajar light was also barely lit indicating that the rear door was open - we've been having trouble with the back door latch for a few weeks.  I muttered under my breath as I began trying to figure out who I could get to drive over and jump my battery.  But then I remembered my Power Station (also sold as a Power Box, Jumper Starter, or Power Dome).

Here is the product detail:
You won’t get stuck on the side of the road again if you have the Stanley Digital Power Station. It features a 350-amp battery jump starter with 700 peak battery amps, a built-in digital tire inflator with automatic set and auto shut off, a 200 watt 120 volt power supply, a 3 LED emergency light, USB, and DC outlet.

There are many similar products on the market.  This was the only one I could find the day before I left the U.S. to live overseas (I packed it in my car at the port).  I am a fan of the Stanley Power Station, but I know there are other versions that have much higher ratings on Amazon and other sites.

Bottom line, I highly recommend getting one of these portable jump starters.  I have used mine to inflate low car tires, bike tires, balls, and air mattresses.  I have recharged a cell phone with this, and now I have jumped my dead car battery... in less than 3 minutes and made it to work on time!

﻿
Posted by John K (Temperate Climate Permaculture) at 4:13 AM