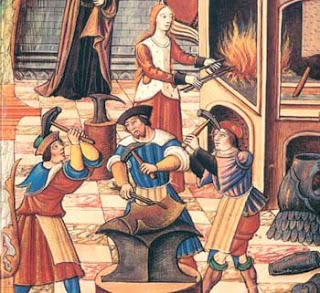 A Blacksmith Guild
http://www.traditioninaction.org/OrganicSociety/Images_1-100/A_023_Blacksmith.jpg
A guild, according to Webster's Dictionary, is an association of people with similar interests or pursuits, also, or more particularly, a guild is a medieval association of merchants or craftsmen.  The word guild comes from the Old English and means Payment or Tribute.

Historically, for example, a carpenter could pay tribute to join a carpenter's guild.  He would then be protected by the society of fellow carpenters... protected from price gouging, unfair trade, etc. and protected from others stealing their "secrets", i.e. skills or "tradesecrets".  This is where a lot of the secret societies were initially formed (like the Masons... initially, stonemasons).  That carpenter could then focus on being the best carpenter he could be while making a good living for himself and his family.  But enough of the history...

This term has been applied to Permaculture to describe a collection of plants (a polyculture) that individually could survive on their own, but perform much better when grouped together. 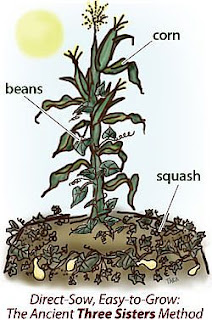 One of the first, and most well known, Permaculture Guilds... the Three Sisters.
http://api.ning.com/files/H5c*qJE70zhPQyH0YVPLwQTZm7xxzW5HhxqQf3ys9D5bzDh3u1xjKrMLIm1PFfQfidvTx9s5CF7cyNJ4onNzkzWx6ClHtR4q/3sistersmain_Full.jpg
The classic Permaculture Guild is called the "three sisters" named by the Iroquois (native American tribe).  The three sisters are corn, beans, and squash.  The corn provides support for the beans.  The bean is a legume and pulls nitrogen from the air and puts (fixes) it in the soil with the help of bacteria and fungi.  The nitrogen fertilizes the corn and squash.  The squash, with its large leaves, shades out weeds and prevents moisture evaporation, and has prickly leaves which deter animal pests.  Finally, squash, beans, and corn are nutritionally complementary.

Permaculture Guilds then are "groups of species that support each other in beneficial ways, aiding self-maintenance, and reducing the work required to maintain the system." - Martin Crawford (Creating a Forest Garden) 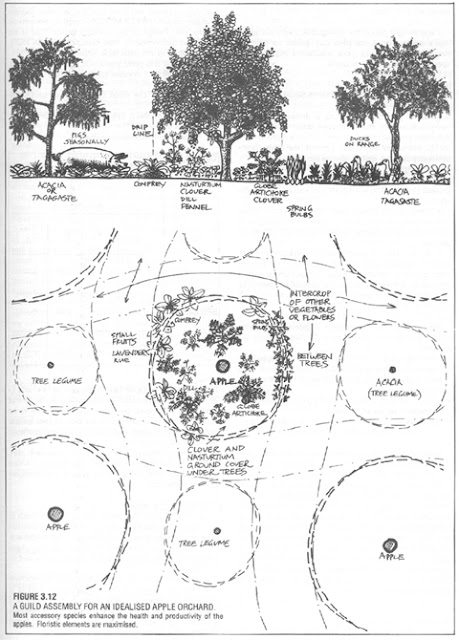 An Apple Guild design by Bill Mollison
http://www.labocacenter.org/Portals/3/Templates/IdealAppleGuild.jpg
Polycultures (as opposed to monocultures like a field of corn) offer many benefits according to Dave Jacke (Edible Forest Gardens):

Ideally, a Permaculture Guild will provide the following: 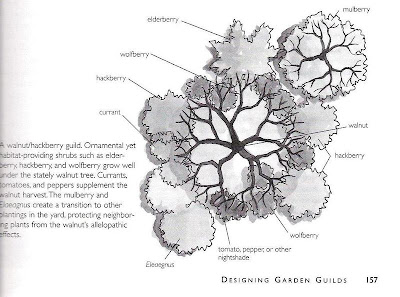 A guild design by Toby Hemenway (Gaia's Garden).
http://smartpei.typepad.com/.a/6a00d83451db7969e2011570d7df9a970b-800wi
There is so much to building and designing guilds, and so many benefits from them, that it is impossible to convey it all in one post.  I'll add more, a bit at a time, about constructing Permaculture Guilds and provide as many examples as I can.  I just wanted to introduce the concept in this post.
Posted by John K (Temperate Climate Permaculture) at 4:05 PM