Plants in my Azorean Garden (please help me identify!)

I wanted to share some photos (LOTS of photos) I took of the plants in my new garden. As I wrote earlier, this space was designed and planted to be a formal garden. There are a wide variety of flowering bulbs and perennials as well as a number of specimen plants. Here is a good representation of what I have growing. I also added a few photos of plants I have not yet identified. Any help would be greatly appreciated!﻿ 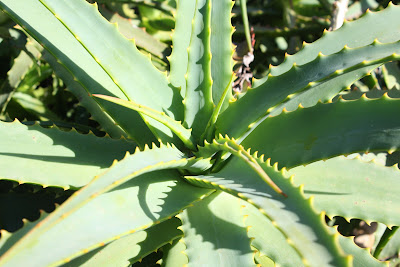 Aloe genus
I don't think this is the True Aloe (Aloe vera), but it is very closely related.
I got a blister, which ruptured, from pruning with kitchen shears instead of my garden clippers (still waiting for those to arrive). It was constantly sore for a full day before I remembered I had all these aloe plants growing in the garden. Literally within three or four minutes of rubbing the gel from a broken leaf onto the wound, I was pain free. I love this plant! 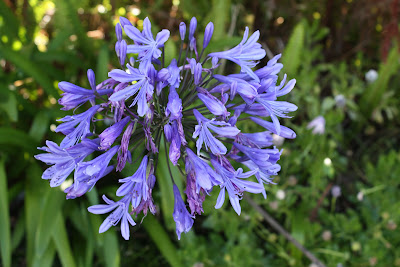 Agapanthus genus for sure, probably Agapanthus africanus
These flowers, both white and this blue-purple, area all over the island. Also known as the African Lily or Lily of the Nile - which is funny because it is neither a lily nor hails from Africa. It is from South America. Reportedly has historic and rarely used medicinal value. 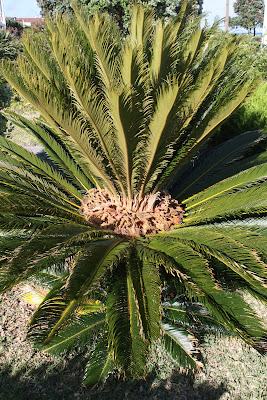 Cycad, unidentified species
Can anyone identify this? 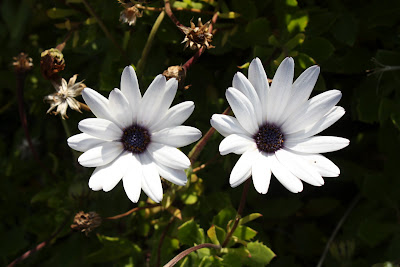 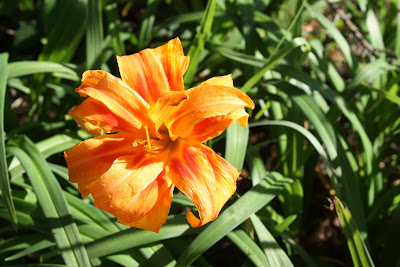 Common Day Lily (Hemerocallis fulva)
This is the "original" Day Lily. It is edible from root to flower, although the leaves can be fibrous.
I've eaten a few of these flowers here already, and I really enjoy them... crunchy and slighly sweet.
Note that not all Day Lillies are edible. 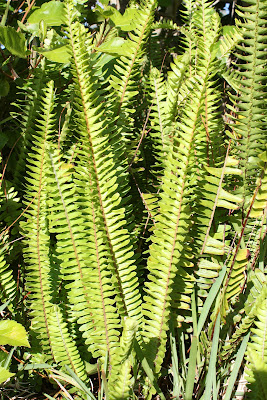 Unidentified fern
Can anyone identify this? 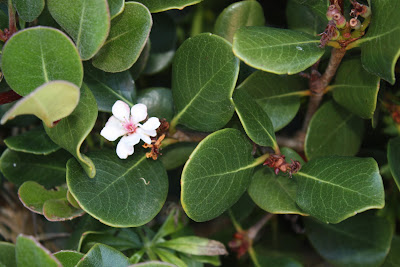 Unidentified flowering shrub
Can anyone identify this? 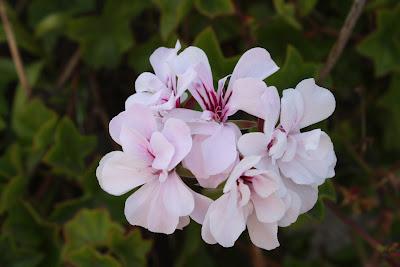 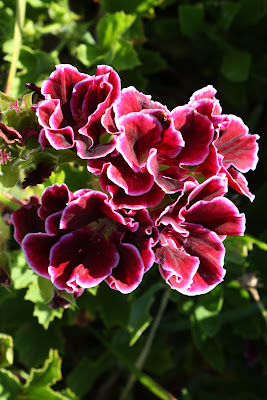 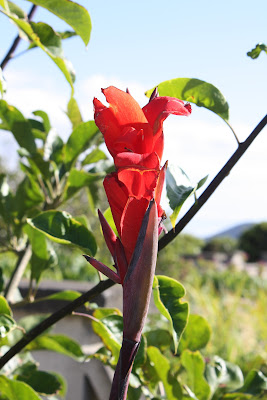 Indian Shot (Canna indica purpurea)
Reported to have an edible, starchy root and edible young shoots.
I'll let you know when I try it. 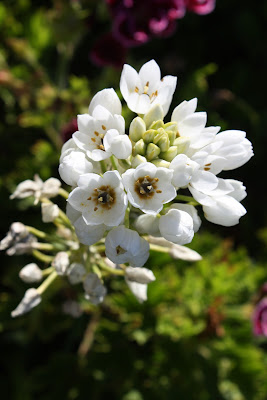 Bulb plant. Looks similar to Wild Onion, but I keep forgetting to examine it closer.
Can anyone identify this? 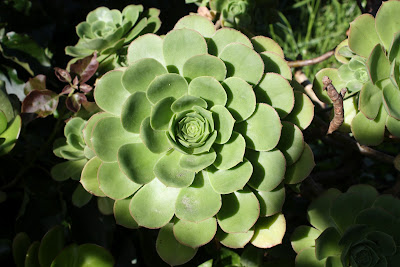 Unidentified Hen and Chicks species (likely from either the Sempervivum or Echeveria genera)
These plants are fairly common around here. I've seen a number of homes with these in the yard. 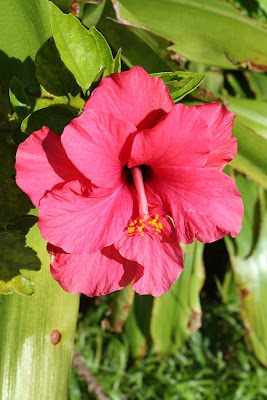 Hibiscus genus, probably the Chinese Hibiscus (Hibiscus rosa-sinensis)
We have a number of these hibiscus growing in our garden.
Young leaves can be used as a spinach substitute.
Flowers are edible and can be made into a tea.
I'll let you know when I try them. 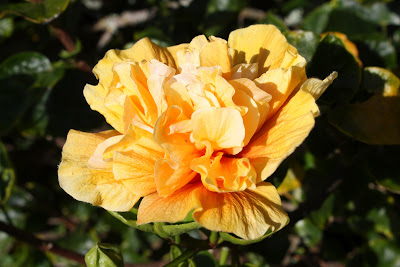 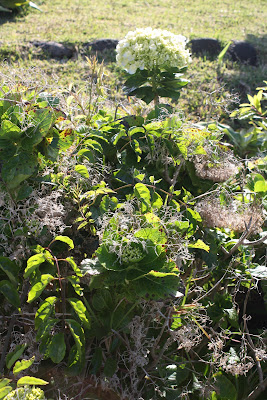 Hydrangea genus
Hydrangeas are considered an invasive species in the Azores. They are all over the place. You could probably walk around the entire island without losing sight of at least one Hydrangea plant.
This plant here was in dire need of a good pruning.
I pruned it last week, and it already is bounding back.
There are now well over a dozen flower heads forming. 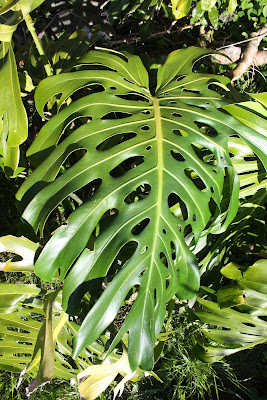 Pretty sure this is a Monstera plant, probably Monstera deliciosaProduces an edible fruit reportedly similar in flavor to pineapple.
I'll let you know. 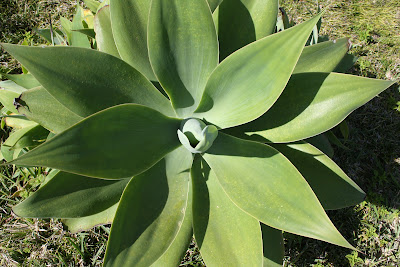 Pretty sure this is a Lion's Tale Agave (Agave attenuata)
Agave have many edible parts. I'll experiment with these as the garden is full of them.
I'll let you know. 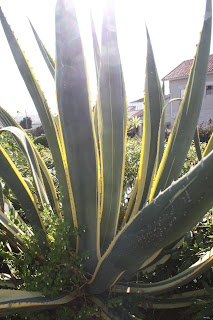 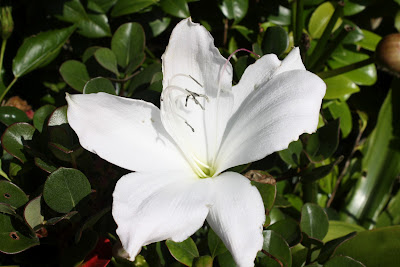 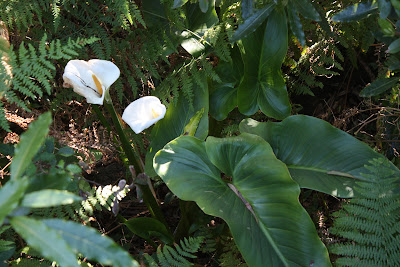 Calla or Arum Lily, Zantedeschia aethiopica
These lilies are all over the place in the understory of the undeveloped land next door. 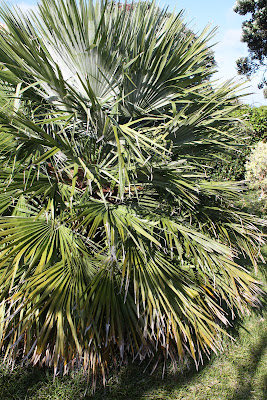 Unidentified palm 1.
Can anyone identify this? 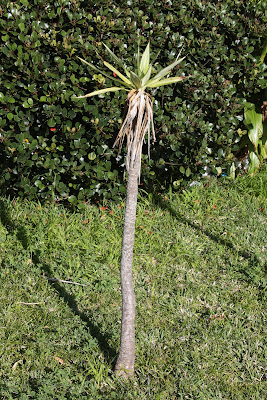 Unidentified palm 2.
Can anyone identify this? 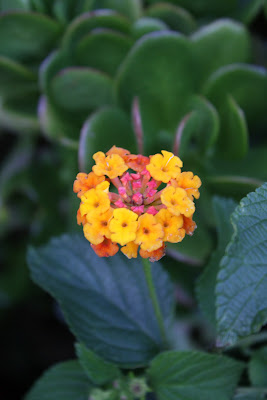 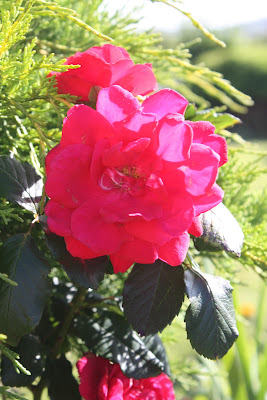 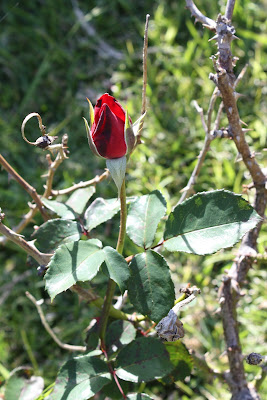 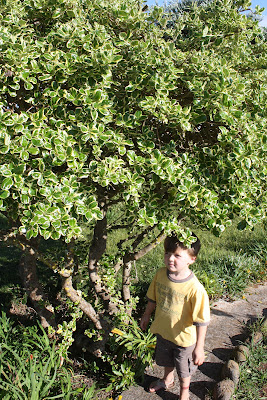 Unknown varigated shrub.
Can anyone identify this? 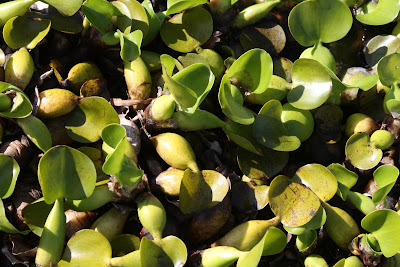 I believe this is a Water Hyacinth (Eichhornia genus).
This floating plant filled the fountain in the garden.

Posted by John K (Temperate Climate Permaculture) at 6:39 AM