I fell in love with a hoe! 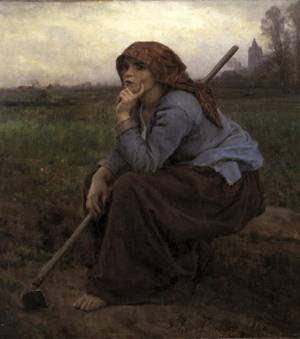 A Peasant Young Girl With a Hoe
Jules Breton, 1882
http://www.shafe.co.uk/crystal/images/lshafe/Breton_Young_Peasant_Girl_with_a_Hoe_1882.jpg

Although my parents have become quite good at producing a lot of vegetables in their garden now, I was not raised by gardeners or farmers. As a kid, the only thing I ever used a hoe for was mixing concrete. Over the years, as I have gotten more and more into gardening and Permaculture, I have used my garden hoe on occasion. To be honest, I hated it. It was so much work to do anything. My cheap, mass produced garden hoe has been sitting with my shovels and rakes for a few years now. All the other tools are taken out on a fairly regular basis, but not the hoe. It has remained on the bench while all the other tools have had a chance to play.

Over this past weekend I noticed that my garden beds were getting quite a few small weeds growing in them. I thought about how long this would take to hand weed. I thought, "Well, people have been using garden hoes for centuries or more for this job. I may as well try it as well."

On a seemingly unrelated note, I am now living in a place the has a fireplace which we have used everyday this Winter. I have been splitting wood and making kindling for a few months. It wasn't until I finally purchased a high quality ax that I realized how poor little hatchet really was. I am planning on discussing that soon in another article, but the hatchet I had was poorly constructed and dull. Very dull. After using a razor sharp ax, the chore became enjoyable.

So, I grabbed my garden hoe, and I looked at it. I mean I really looked at it. It dawned on me that this is a chopping tool. Things that chop, like a knife or an ax, need to be sharp. I checked the blade of the hoe, and it looked like every other hoe I have ever used. Dull. I grabbed my metal file, sat on the handle, and sharpened the blade of my hoe. It took a whole five minutes. Then I headed to the garden.

To say that this was an epiphany would not be exaggerating. I weeded the garden bed in less than ten minutes. I was standing the whole time; my back didn't get sore. The entire time, I kept thinking to myself, "How could I have never known?" Sharpening the blade of the hoe suddenly made this stick with a hunk of metal on it a useful tool. It was wonderful. It was easy. It was enjoyable. I fell in love with a hoe!

Then, because my brain never shuts off, as I was repeating to myself, "How could I have never known?" I thought that ancient people from around the world knew this for centuries, and I have to relearn it. Of course this is a minor thing, and many people who use garden hoes never forgot it, but some did. What else has dropped from common sense? What other things have we entirely forgotten?

I thought of ancient cultures that had rich gardening and farming heritages. The Egyptians, the Babylonians, the Chinese, the Japanese... the Japanese did a lot of gardening. The Japanese have a whole variety of hoes. The Japanese also wrote haikus about nature. "How could I have never known?"has seven syllables. I could write a haiku. So here it is:


Sharpen the darned thing!
How could I have never known?
Ancient tool reborn.
Stay tuned for more poetry about garden tools!