Questions from Readers: What Trees to Use and Avoid in Hugelkultur Beds? 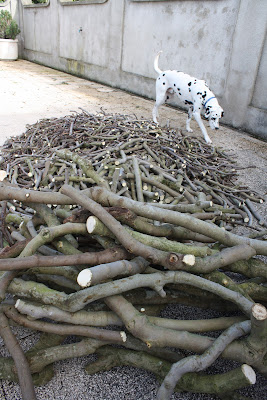 The cut branches from my recently trimmed fig tree.

Can I use the timber from the fig trees to build a Hugelkultur raised beds?
-Valter


I recently had a reader post a question on my article, Pruning the Fig Tree... Wood for smoking and heat!  For more information on hugelkultur beds, you can read about them in my article on Permaculture Projects: Hugelkultur.


The short answer is to Valter's question is yes.

Here is the long answer...

The benefit of a hugelkultur beds is likely derived from numerous things. First, as the wood slowly breaks down, the rotting material acts like a sponge. This "sponge" holds on to water and slowly releases it over time. Any plants which are growing above it will be able to stay hydrated with deep roots during periods of little or no rainfall for much longer than other plants nearby. Great!

Second, as the tree rots, it will slowly be giving off nutrients, specifically nitrogen, which will act as a slow release fertilizer. Perfect!

Third, fungus and bacteria are some of the key players in the rotting process. These organisms are also vital components to the underground network of soil life. When we place logs and branches underground (remember that they are already going to be inoculated with local fungus and bacteria, and they will readily welcome new fungus and bacteria as well) we are jump starting the intricate soil web of life. We are placing highways and tunnels all through the soil which will shoot these beneficial life forms under everything we grow. We are, in effect, helping to create an established forest soil in a matter of hours or days. Amazing!

There are likely many more benefits to hugelkultur and probably dozens of more things that are going on in wood and soil, but this is what we know for sure right now.

With all that said, all trees will eventually break down and be of benefit to the soil life. However, when we are designing Permaculture systems, and especially when we are trying to reclaim a barren soil or overgrazed pasture, then we want to expedite things a bit. And some wood just takes too long to rot.

So we should avoid using wood that naturally resists rotting in our hugelkultur beds. Here are some examples of trees that are considered to be very or significantly rot-resistant: