Pruning the Fig Tree... wood for smoking and heat! 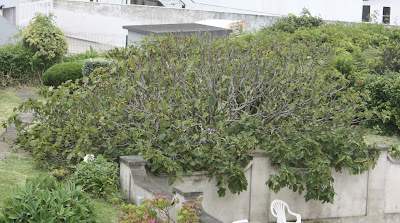 Yesterday, two men came to the house. After a phone call for translation (my Portuguese was about as good as their English!), I learned that the owners of the house we rent had sent these two men to prune the fig tree. Learning how to prune the fig tree was actually on my list of things to do... along with literally a few hundred other things! The tree was quite large and "leggy" in appearance with long, skinny branches and not many leaves except at the tips. I knew the tree needed to be pruned back, but I had no idea how to do it, so I was excited to see how it was done. 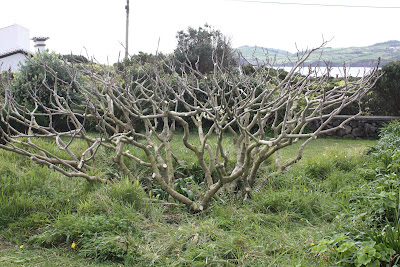 To be honest, I have no idea if these men were professional fig tree pruners, if they were professional or skilled tree trimmers of any kind, or if they were just a couple of guys who had some tree loppers and were available for hire. It did appear that they had at least done this before. They removed about half of the branches and really opened up the tree's framework. When I took the time to research pruning fig trees, it turns out that it is pretty simple. Figs will be produced on new shoots in the same year from even severe pruning. 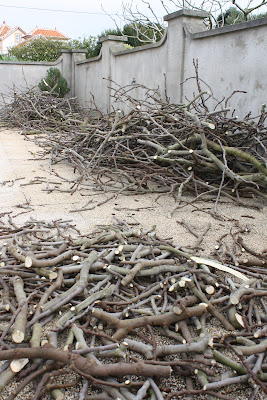 The pile of pruned branches.

There were five or six piles of branches left in the yard after the pruning was complete. This morning my boys and I, okay it was mostly me, moved all the branches onto the patio area. This was for a few reasons. I wanted to have a clear area to work. I wanted a place for wood to dry out, and that patio gets a lot of full sun. It gets hot in the summer since it is all white and walled in. Also, the patio was really close to the piles, so a close location minimized the work. 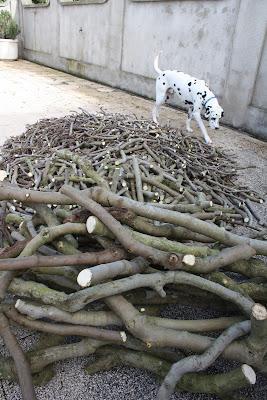 The (mostly) cut and trimmed pile of branches.

I ended up cutting up all the branches in to smaller lengths for kindling and firewood. There are many places in the world (Spain and Portugal included) where people think burning fig wood is hazardous; they think it releases deadly toxic fumes. However, this is not true. In Turkey, for instance, skewers are often made of fig wood to give a unique flavor to the meats. As it turns out, fig wood is used for smoking meats in some of the finest restaurants in the U.S. A New York Times article states that, "At Mercer Kitchen in SoHo, the chef, Chris Beischer, uses the wood to roast lobsters and make pizza. Chez Panisse in Berkeley, Calif., uses it for smoking meats. Oliveto, also in Berkeley, burns it for spit-roasting."

This whole process got me thinking about a few things...