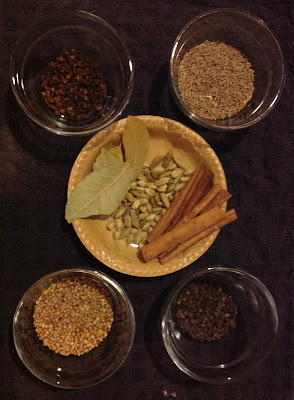 My spice blend for Garam Masala

I cook a lot of Indian food. When I say a lot, I mean both in frequency and in quantity. It is not unusual for me to make an Indian meal or Indian inspired dish up to once a week. That may not be a lot for an Indian family, but for a white guy from Florida, I'm pretty sure that counts as a lot. This past weekend I cooked up a few dishes for a get-together at my house. We ended up with just under 20 adults dining with us. I have cooked for 40+ on more than one occasion, but that was a few years ago. While 20-40 hungry diners may seem pretty laughable for a working chef, it still feels like a lot to me... especially while I am cooking! But I love it, and I love Indian food. As does my wife, which is why I try to cook it as frequently as I do.


Indian Food? I don't like...
I hear from many people who say that they do not like Indian food. One common complaint is that it is too hot (i.e. spicy). Well, traditional Indian food may have a lot of heat in it, but it can easily be made very mild as well. I do think there is a depth of flavor lost when the heat is removed, but the food is still delicious. If at a restaurant, just tell the waitstaff that you cannot handle any heat at all, and they will can easily accomodate you and your weak tongue.

The other common complaint is, "I don't like curry." My rebuttal to this could be a 30 minute discourse, literally, on curry and what it is and is not. I will be much briefer today. "Curry" is really a Western-civilization corruption of the South Indian and Sri Lankan (Tamil) word, "Kari", which just means "sauce". The sauce is typically served over rice, and the sauce typically has vegetables, meat, or fish in it. Now there are curries from India, but there are also curries from Bangladesh, Nepal, Pakistan, Afghanistan, Thailand, Vietnam, Indonesia, Burma, Malaysia, the Philippines, and even the Caribbean, to name a few. To say you don't like curry is to say you don't like a well-flavored sauce with meats or vegetables.

Another variation of this complaint is, "I don't like curry powder." This is more narrowed down, but still does not rule out Indian food by any means. Curry Powder is not something you would buy in India. Well, to be fair, you probably could nowdays, but not in the nineteeth century when it was invented by British folks who wanted to export the taste of India to Britain. The original Curry Powder spice mixes were significantly more varied then they are today, and each producer had their own recipe. Some of these spice mixes originally contained dried, ground leaves from the curry tree (Murraya koenigii). However, over time, the curry tree leaves were not used anymore. The modern standard ingredients of Curry Powder now sold in supermarkets in the Western world is a dried, ground mixture of Tumeric, Corriander, Cumin, Fenugreek, and Red Pepper. Mild and hot Curry Powder just have respectively less or more Red Pepper. Most people who do not like Curry Powder either do not like Tumeric or do not like Fenugreek, and these spices are not used in a whole lot of Indian dishes. I have met at least one person (Shane, if you actually read this far into this article, sorry to point you out!) who doesn't like either Corriander or Cumin (I am not sure which one yet); however, he still eats the food anyway. So, if you have someone who doesn't like Curry Powder, try to figure out which spice it is they do not like, and avoid that one. This is easily done considering the varitey of recipes out there.

Bottom line: If you do not like Indian food, then I venture to say that you have not had enough experience with it. There is so much variety that you cannot really make that large of a generalization.


Garam Masala
This past weekend, I made a standard Chicken Tikka Masala, a Beef Korma, a Chicken Biryani (from a great recipe courtesy of the mother of my good friend, Christo, native to southern India), and Aloo Gobi. Fortunately, as usual and rather on purpose, I made way too much, and everything but the biryani freezes very well. This is perfect after a busy day when I just don't have the energy to cook. Steam some rice and heat up a some frozen Korma... delicious!

One of the common ingredients in these dishes was Garam Masala. I have been meaning to share my Garam Masala recipe for years as it is so simple to make. It is nothing terribly unique, but it is what I use, and people enjoy eating my Indian food.

So what is Garam Masala? Why would you want to know anything about it? And why do I call it the "Gateway to Indian Cuisine"?

Garam Masala is a blend of ground spices used in traditional Indian cuisine. There are as many variations of Garam Masala as there are people who make it, and there are hundreds of thousands of people who make Garam Masala at home every week. It is similar to saying "barbecue sauce" or "salad dressing" in the United States. There are so many regional variations and personal preferences that the variety is almost endless. However, there are some basic common themes to this spice mix that makes approaching it much more manageable. Here is my recipe as a start:

Garam Masala
Gently dry roast the individual spices - place each spice (i.e. 2 teaspoons Cumin Seeds) in a hot pan with nothing else and cook over high heat until the spice becomes hot and aromatic. Constantly stir or shake the pan to avoid any burning, which can happen quickly depending on the spice. Set aside to cool. Once cool, grind the spices in a spice grinder (a coffee grinder works great for this, but keep it for spices only) or use a mortar and pestle (takes a while until you get good at it - trust me, but it is still worth it). You do not need to dry roast the spices, but it brings out more flavor and aroma. Once ground, store in a small container that is airtight. Will store for months, but slowly loses flavor intensity over time.

Other ingredients that may be used in Garam Masala

Garam Masala is used in some dishes as the main or base spice layer and in other dishes as a minor flavor enhancer where other spices are more predominant, but it is very commonly used in many recipes. Once a person tries to make Garam Masala, they will realize how easy it is to make. The rest of almost every Indian recipe will be simple after that. After a person gets past the intimidation of making their own Indian spice mix, a whole new culinary world will be opened. If you have never tried to make an Indian dish, I hope this article will give you the courage to try.