Picking, and Eating, Tomatoes with my Daughter 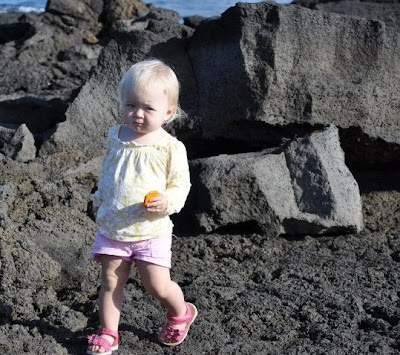 My daughter on the rocky shore near our house.
She wants to be outside every chance she gets.

On almost a daily basis, I try to do at least a quick walk through of my garden with my daughter. She is only 15 months old, so the walk through usually consists of my carrying her. I tell her which plants are growing well. I will pick some mint or crush some thyme and let her smell the fragrant leaves. She only has a few words, so most of the conversation is one sided. She does manage a high-pitched, "oooh, oooh, oooh" when she spots a plant at which we normaly stop to examine further. However, since her first taste of a vine ripened cherry tomato a few days ago, she can barely contain her excitement when she realizes we are going anywhere near that plant.

We had a lot of roadblocks to a decent tomato harvest this year. The biggest problem was that I moved in the middle of the summer and could not get my seeds in the ground until late August. I only planted a few plants, and a short while after fruit set, Hurricane Nadine came through... twice! The plants were almost entirely shredded by the winds. There was one side of one plant that made it through relatively unscathed. The half dozen small green cherry tomatoes were protected from the wind and are ripening on the vine.

We've picked and eaten three of them so far, and now there are only three left. Within a few days, they will be gone. I’ll wait until these fruit are perfectly ripe, and my daughter and I will together savor the last of tastes of summer. I would venture to say that these few tomatoes may be the best tasting tomatoes I have ever tasted… or maybe it is just because of the girl who is eating them with me.

I don't care either way.