The Art of Stacking Firewood 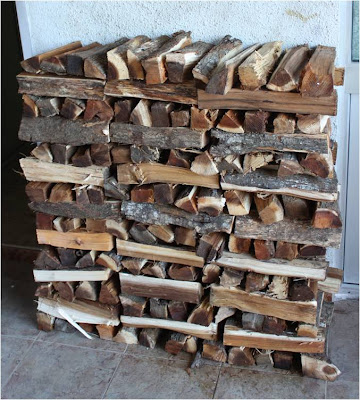 My first attempt at stacking firewood

Yeah, it's the middle of summer, but I just had my first load of firewood (ever) delivered yesterday. I figured it would be cheaper in the off-season, and I want to do some smoking and barbecuing in the next few weeks, so now is a good time.

I hope in the future, when I have some land, to harvest my own trees and split my own firewood, but for now I have to get it delivered. I'm okay with that, as there are so many other things I want to spend time doing.

Just to remind anyone reading this, I grew up in South Florida. There were a few people there who had fireplaces, but it was mainly for show. There may be three days a year, where you could have a fire in a fireplace without needing to turn on the air conditioning as well. Cold days were not common at all where I was raised, so at age 36, I finally stacked my first tower of firewood.

Here are a few things I learned. There really is an art to stacking firewood. It's not like stacking bricks all the same size. Trees, and the subsequent splits, are rarely straight and flat. If not stacked right, the tower is very unstable. With three kids ages four and under running around my house, I really needed to do this right. Fortunately, it didn't take me too long to get the hang of it. But I will not say it was quick to build a stable tower of irregularly shaped firewood. Also, my tower is not tremendously tall. Even more attention to stable building would be required if I build a tower higher than I did.

It was also really refreshing to be working with my body and not just my brain. As a physician, I often go days without feeling as if I accomplished anything physically productive. I love being a doctor and taking care of those who are ill, but there really is something to using my whole body to complete a task. To be honest, I don't want to do hard labor full time, but after building this tower (and five other smaller ones under the brick wall posts on the side of the house) I realized how important it is for me to be "working" outside. I often recall my friend Justin reminding me that the physics definition of work is force miltiplied by distance, so if I wasn't moving something, I wasn't really working. There is something to this. I truly believe there is something innate to the human body that desires, and maybe requires, physical work to feel complete and at peace.

A few hours after I stacked the forewood, I decided to browse the internet to see if there was anything I should have known before I started stacking the wood. As it turns out, I did everything right. I am not sure if this was an instinctual thing... likely from seeing so many stacks of wood outside homes when I lived in Kentucky and Minnesota. Maybe it was from reading articles on homesteading that covered firewood. But it was gratifying to see I did it right.

Here's to a warm winter and slow-cooked, smokey-flavored meat!

Here are some of the articles I found online:
How to Stack Firewood - Popular Mechanics
The Science of Wood Stacking - Mother Earth News
Some Thoughts on Stacking Firewood - Woodheat.org

Posted by John K (Temperate Climate Permaculture) at 7:06 AM