Hope in a Changing Climate... an Amazing BBC Video! 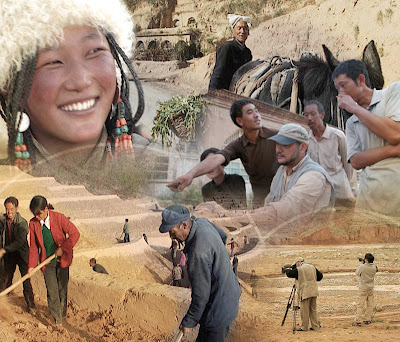 I am rarely truly amazed by a video any more. That is unfortunate, but it is also all the more remarkable when it does happen. Hope in a Changing Climate amazed me. Regardless of your perspective on why the climate is changing (human created carbon damage, normal earth cycles, etc.), the Earth's climate is changing. This video ignores the controversial aspects of climate change (or global warming/global cooling/global weirding/or whatever they want to call it now...), and shows that there is a real economic, as well as environmental, conservational, agricultural, and societal reason to reverse the damage that has been done to the land. This video shows that there are whole countries working on this, not just some hippies who don't know when to bathe. This video shows that repairing the land to produce viable sustainable and restorative ecosystems that benefit humans and the natural world (this is Permaculture!) can work on a very, very large scale. Inspiring and truly amazing!

FROM THE BBC PRESS RELEASE FOR HOPE IN A CHANGING CLIMATE:
...a new documentary on BBC World optimistically reframes the debate on global warming. Illustrating that large, decimated eco-systems can be restored,Hope in a Changing Climate, which will have a special screening at COP15 [the 15th Conference on Climate Change], reveals success stories from Ethiopia, Rwanda and China which prove that bringing large areas back from environmental ruin is possible, and key to stabilising the earth’s climate, eradicating poverty and making sustainable agriculture a reality.

The programme documents the remarkably successful efforts of local people to restore denuded, degraded ecosystems – transforming them into verdant, life-sustaining environments which enable people to break free from entrenched poverty. The film contains breathtaking before and after footage of large-scale restoration projects. Presented by John D. Liu, founder of the Environmental Education Media Project (EEMP) and creator of the film Lessons of the Loess Plateau, the new programme is directed by Jeremy Bristow from the BBC, the award-winning producer of the acclaimed David Attenborough seriesThe Truth about Climate Change.

The area of restoration on the Loess Plateau in China is the size of Belgium and thousands of years of subsistence farming had made it barren and unfertile. In 1995 The Chinese Government, with support from The World Bank, took drastic action to rehabilitate the plateau, and local people – seen as both perpetuators and victims of the devastation – became part of the solution.

John D. Liu has been visiting the area for the past fifteen years and in Hope in a Changing Climate travels back to find astounding results. He said: “Human impact on the climate is not simply from the flagrant emission of carbon dioxide and began long before industrial scale emissions. Carbon disequilibrium is a symptom of a larger systemic failure – we are reducing biodiversity, and this has altered fundamental earth processes that we rely on for life. We must act as a species to restore ecosystem function wherever it has been disrupted. We know what is needed; we know it works; and we know from the history of other civilizations that have collapsed what the consequences are of failing to act – and quickly.”

The film uncovers the dramatic impact of similar projects in Ethiopia and Rwanda. Once the scene of devastating droughts in 1984, Ethiopia has used the same approach as that in China to begin bringing areas of arid land back to productivity and ecological balance. In Rwanda, where ecological degradation from over-farming of wetland areas saw the near failure of the country’s hydro-electricity supply, the Government has undertaken a similar project and seen vast improvements.

Dr Joe Smith is The Open University’s lead academic for the programme and says: “With climate change projected to hit the poorest people in the developing world worst of all ecological restoration projects are key to ensuring that future generations have security. What is refreshing about this film is that developing world scientists and policy-makers take centre stage in devising responses to environmental problems. The film also shows how ordinary people in China, Rwanda and Ethiopia play a key role in restoring and protecting their environment. It can feel disempowering to look at global issues such as climate change or biodiversity loss; but the breath-taking before and after footage from these projects shows that imaginative research and policy can generate solutions on the ground.”
Hope in a Changing Climateis produced with support from the International Union for the Conservation of Nature (IUCN), The Open University, The Rockefeller Foundation, the Syngenta Foundation for Sustainable Agriculture and The World Bank. The film will also be made available on The Open University’s new Creative Climate website, www.open.ac.uk/creativeclimate, which documents diverse experiences of climate change across the globe. In addition, EEMP and the George Mason University Center for Climate & Society have organised a network of research centres and nongovernmental organizations around the world to host facilitated stakeholder discussions around the themes of the film.

Here is the video, Hope in a Changing Climate:


Hope in a Changing Climate
http://www.youtube.com/watch?v=kK8z0qDtE2g

Email ThisBlogThis!Share to TwitterShare to FacebookShare to Pinterest
Labels: Permaculture in Action, Videos